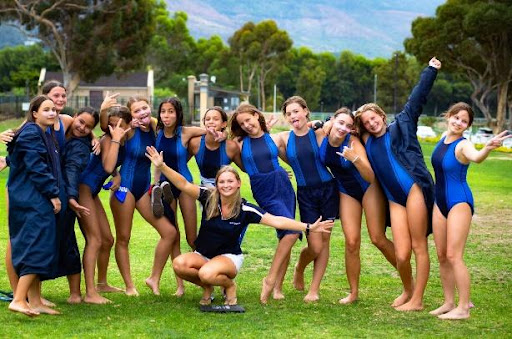 The second Inter-House event with our new houses took place on Friday 11 February in the form of the Inter-House swimming gala. And, what a colourful, fun and noisy event it turned out to be. Thank you to the Spirit House Leaders for so ably assembling their swimming teams and ensuring that there were participants in every event.

A special mention must be made of the U19 team representing Lepus who broke two of the school relay records. Erin Daffarn, Anna Gray, Jaime Kelly and Tyra Phipson (all Grade 12s) broke both of the relay records, one dating back to 2010. A huge thank you to our swimming captain’s mom, Mrs Janine Gray, for handing over the prizes to our winning individuals and teams. (For results see the swimming section in this report).

With the first term Summer Sports programme in full swing, we start to plan the upcoming Winter Sports programme. To assist you with planning, please note the following dates and times of the Netball and Hockey trials. Learners will be invited to sign up via a link that will be sent to them a week in advance of their trials.

The sign-ups for other winter sports codes will commence in the last week of Term 1. The programme offers Cross Country; Football; On-the-Move and Squash (off-campus at Kelvin Grove Club). There are no trials for these sports.

Congratulations to Sasha Sivertsen, our 1st Team Indoor Hockey coach, who has been selected as a member of the WP Ladies A team for Indoor Hockey. We wish her well in her preparation for IPTs.

Also, congratulations to our own Mr Ncukana on his selection to umpire at IPTs.

Our third Indoor Hockey League fixtures of the season were played on 9 February against Fairmont High School. The work that is put in during our training sessions is paying off, and it is wonderful to watch our teams improve every week.

All matches were played at Fairmont High School.

The On-the-Move sessions are alive and well in 2022. Welcome to all the new members who have joined this activity and have started logging up kilometres towards becoming members of the Rusty Runners Club (RRC).

Congratulations to the following participants who have reached new milestones this year in the RRC.

Congratulations to all our swimmers who represented Rustenburg on Thursday at the Rhenish Boy/ Girl Gala. Rustenburg placed 3rd overall. The only official results received so far are the overall positions and points.

Girls results with positions and points:

Juliana Barrish (Grade 12) placed 3rd overall in a Cape Town mini-tournament this past weekend. She beat one of the top SA players in the first round while breaking both of her rackets’ strings at the start of the match and being forced to play with a completely different racket. Juliana ended the tournament strongly with another win to secure her 3rd place. Congratulations on overcoming your technical problems and achieving this fabulous result.

After a long day consisting of our school’s gala and talent show, our touch rugby players participated in their first round of league matches. Our 1st team played in 2 friendly matches against Wynberg Girls’ High School and Westerford High School, while our 3rd team played a round of friendly’s against Springfield High School. Our 2nd team smashed their first match for the league, beating Wynberg Girls’ High School 10-0. A huge congratulations to all our teams for winning all 4 matches and to Trinity Ngaka (Grade 10) for being the player of the match!

The U14A water polo team participated in the Dave Pitcairn Water Polo Tournament hosted by Reddam House Constantia from 11 -13 February. The U14A team played some challenging oppositions in the pool games but managed to come fourth in their pool. The U14A team then moved on to play in the quarter-finals, where they lost to Herschel Girls’ High School. The final standings saw RGHS coming eighth in the tournament. Congratulations to the U14A team on a fantastic result. Thank you to Coach Teagan for giving of your time and expertise.

The Rustenburg rowers representing the PGRC did us proud this past weekend at the Buffalo regatta and Selbourne Sprint regatta.

Lyla Cahill (Grade 9) won double gold in her single scull – winning both the U15 women’s 500m Sprint and the 2km heat and final.

Darcy Gliddon and Robin Day (Grade 10s) rowed in a double and won their heat in the U16 women’s 2km, coming third in the final. In the 500m doubles race, they also won the heat and came 2nd in the final.

The quad consisted of all Rustenburg girls – Lyla Cahill and Sienna Callow (Grade 9) and Hannah Murphy, Robin Day and Darcy Gliddon (Grade 10s) and competed in the U16 junior womens’ coxed quad races. Over both 2km and in the 500m sprints they came 2nd to Holy Rosary, beating tough crews from St Andrews Girls, St Stithians and Clarendon.

The next event is the South African Schools Championships in Gauteng, 4-6 March. Congratulations on these excellent results and good luck with the training in preparation for SA’s.

Nika du Preez (Grade 12) placed 1st in the ILCA 4 (Laser 4.7) class in the Cape Classic Series hosted by Hermanus Yacht Club over the weekend. Congratulations on this outstanding performance, Nika.