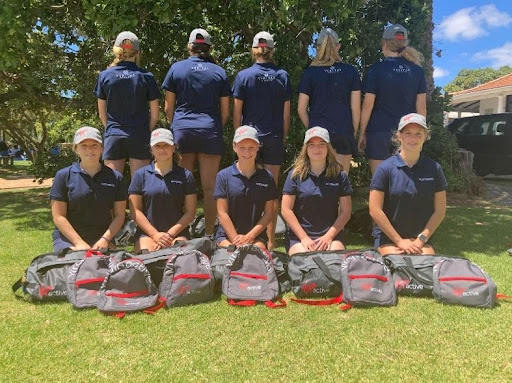 We wish the U16A Water Polo Team all the best as they participate in the U16 Fireball Tournament at Rhenish Girls’ High School in Stellenbosch.

Our second Indoor Hockey League fixture of the season was played on 2 February 2022 against Herschel. Our teams put in some incredible performances against really tough opposition and showed great improvements from the previous games. While some results did not go our way, it was wonderful to see the growth that has taken place in just 7 days, and we are already looking forward to our next fixture.

All matches were played at Herschel.

Katja de Villiers (Grade 8) participated in the District Netball League over the weekend in Stellenbosch.  Her U14 team won the gold medal. Katja was part of the Pro Star Netball Academy team. Congratulations on this fabulous achievement, Katja.

With the Touch Rugby league starting next week, the players participated in an internal league between our 4 teams. It was exciting to see all of the players back on the field for the first time this year. Training sessions have been going very well and they have learnt a lot in preparation for all of the games to come. It was fantastic to see this all come to life in a game situation. Thank you to all those who came to support the teams!

On Thursday 3 February the remainder of the RGHS vs Wynberg Girls’ High School fixtures were played. Both the U19B and U14A water polo teams played well and showcased some good water polo.

The water polo league fixtures against Herschel Girls’ High School were played over Monday 7 February and Tuesday 8 February. All the games were high intensity and made for some good water polo.

The U16A water polo team participated in the Alex Road Festival from 4 – 5 February in Gqeberha. RGHS took a young U16A team comprising of one grade 8, eight grade 9’s and four grade 10’s to this first team festival. The team faced some tough competition and were able to hold their own against some good teams. The Alex Road Festival proved to be a great opportunity to learn, grow and play water polo. Thank you to Coach Oliver for all the long hours put into ensuring the team was ready for the festival. Congratulations to Emily Readhead for being selected by Coach Oliver as “Player of the Tournament” of the RGHS team.

The U14A Water Polo Team took part in the Rhenish U14 Water Polo Tournament at Rhenish Girls’ High School from 4- 5 February. This was the first tournament for our U14A team and a great opportunity to be exposed to some great water polo.  The U14A team faced some challenging opponents, however, they handled themselves well. Congratulations to our U14A team on a great tournament. Thank you to Coach Teagan for preparing our team for this tournament and Coach Alexa for assisting her.

Congratulations to Skye Micklethwaite (Grade 10) on placing second in an Inter-Provincial Biathlon held in Oudtshoorn this past weekend.

A number of our learners have been selected to participate in the 134th Buffalo regatta and Selbourne sprints in East London from 9-13 February. They will be representing the Peninsula Girls’ Rowing Club (PGRC). We wish them all the very best. We do hope to publish a full list with names and results on the rowers’ return.