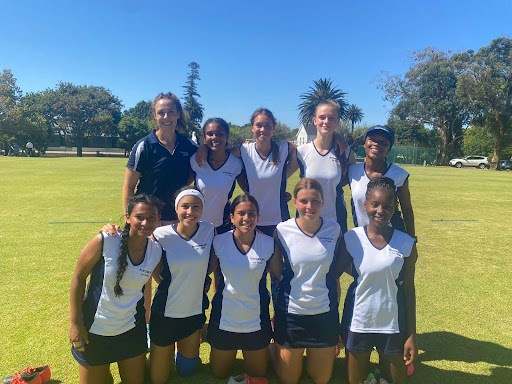 Another busy week of Summer Sport is in the books. Learners are busy signing up for the Netball and Hockey trials through links sent to their school Gmail accounts.

Sign-up for other winter sports codes will commence in the last week of Term 1. The programme offers Cross Country, Football, On-the-Move, and Squash (off-campus at Kelvin Grove Club). There are no trials for these sports.

The Winter sports schedule is available on the link below:

The Indoor Hockey season is in full swing. All of our games on 16 February were played at Westerford High School, against a variety of schools.

It was wonderful to see all the parents out to support our learners.

In order to monitor the On the Move sessions more closely the participants will each take a numbered disc during their 5-minute warm-up. These discs must be returned at the end of the session when they report on their number of completed laps. This will give us an accurate tally of the number of participants who have attended on a particular day. It will also assist us in being more accurate when recording the number of laps completed.

Congratulations to all our swimmers who represented Rustenburg on Thursday at the gala hosted by Fish Hoek HS. Rustenburg placed 3rd overall. See below for results.

Girls results with positions and points:

Maggie Krieg (Grade 9) has earned her Cape Town colours for tennis. She took part in a tournament against Cavaliers (Boland). She was competitive in both the singles and doubles, events but was most successful in the mixed doubles. Maggie and her partner won the mixed doubles event. Congratulations, Maggie.

We enjoyed an exciting day of touch rugby accompanied by music and many spectators. All three of our teams played phenomenally and we managed to win all of our matches for the second week in a row. It is incredible to watch the players in our teams grow and implement new things that they’ve learned each week. Congratulations to our first team who managed to get every player on the team to score a try.

(A reminder to parents to please inform the sports office if your daughter has been selected to represent Western Province in the upcoming Inter-Provincial tournament.)

Congratulations to Allegra Smith (Grade 12) and Michaela Labuschagne (Grade 9) who took part in an open water swim, Around The Rocks (2.5km), on Saturday 19 February. The event took place in Blouberg with the water temperature being 12 degrees Celsius. Michaela placed 14th overall finishing with a time of 32.58. Michaela was the youngest competitor. Congratulations to these brave swimmers.