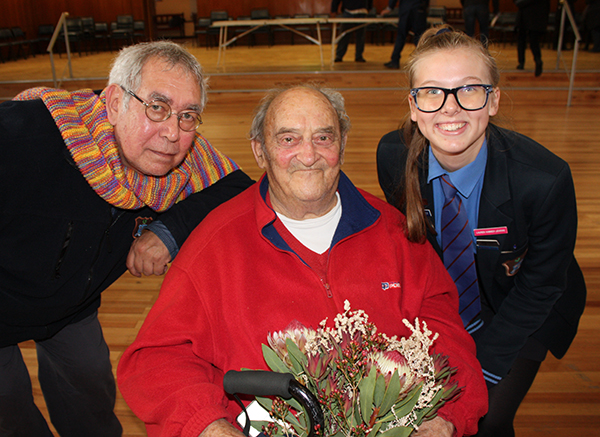 Ruby Wilson’s (Retro member) introduction echoed the thoughts of the whole school and pre-empted some of the content of his speech: “Today I am very privileged and honoured to introduce you to Dr Denis Goldberg, political activist in the Apartheid struggle.” She went further to explain that: “Mr Goldberg was an executive member of the Congress of Democrats, an organisation in alliance to the ANC. He was tried along with Nelson Mandela, Govan Mbeki, Walter Sisulu and others in the Rivonia Trail where he was sentenced to life imprisonment and spent 22 years of his life in the Pretoria Local jail. He represented the ANC at the anti-apartheid committee for the United Nations. He is the founder of H.E.A.R.T, an organisation that improved the standards of living for black South Africans across the country and was awarded the Albert Luthuli prize in recognition of his work.

“In the context of our Youth Day, I believe it is vital to recognise our past and the many activists like Mr Goldberg who carved our present idea of freedom in modern South Africa. He represents the leadership which inspired the youth to fight for freedom against oppression even if we were not personally subjected to it. Given our world of privilege, I believe that if we hear him, he will inspire us to continue the pursuit for justice. I welcome him warmly.”

Rather than speaking about himself, Dr Goldberg started off his talk by referring to journalist, Sam Nzima, who took the famous photograph of Hector Petersen that exposed the brutality of the Apartheid government.  He focused on the Rivonia trialists, Govan Mbeki, Walter Sisulu and Nelson Mandela. He identified with Nelson Mandela’s statement at the trial and said that he too had been prepared to die for the freedom of all people in South Africa.

In order to explain his decision for joining Umkhonto we sizwe and participating in the armed struggle, he traced the history of the freedom struggle in South Africa from the beginnings of Dutch rule in 1652 to the colonisation of the country by the British, who conquered tribe after tribe in Southern Africa. He also drew parallels between the armed struggle of the ANC against the National Party to that of the armed resistance movements who had fought for their freedom from Nazi rule in Western and Eastern Europe. As a privileged white South African, who believed in freedom and equality for all, he felt that he needed to make a contribution to end Apartheid. He chose to use his technical expertise to make bombs to blow up electricity pylons. Rather than dwell on his torture and imprisonment, he paid tribute to the many ordinary people who had made sacrifices to end Apartheid.

In closing his speech, he referred to Youth Day and challenged the youth to continue the struggle:  “…every generation has youth, and you are the youth today. I often get asked how we made the weapons that we were going to use but now is not the time for weapons. Now is the time for the politics, democratic politics, for involvement in social issues. That’s your task. It’s your task to make the country that we believed we would make. I wish you luck in doing this. I want the youth and you are the youth….We hand over the baton, we say. I know that you will do it!” – see video of his speech. Video: Ashiqa Hassan

In addition to our guest speaker, we also hosted a talk by Gahlia Brogneri from the Adonis Musahti Project for Youth. Retro head, Lauren Hawker-Jehring, handed over their takings from the movie evening to this worthy project. See video clip on refugees in South Africa

Nozithelo Falala co-ordinated a short film of RGHS girls explaining why it is important to celebrate and commemorate Youth Day: