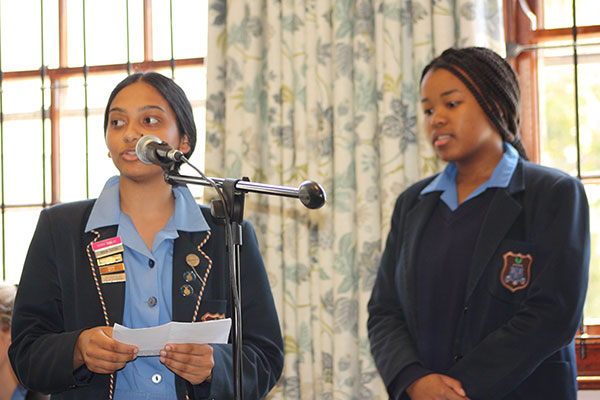 Amukele Ngubane’s opening address provided a background to this tribute on Wednesday 29 November 2017:

“Ms Miriam Lichterman is a holocaust survivor who settled in Cape Town after World War Two. Prior to the outbreak of the war in September 1939, Ms Lichterman lived a comfortable life with her incredibly loving and warm family in Warsaw, Poland. During her teenage years Miriam was unfortunately subjected to subhuman treatment in Majdanek – a concentration camp in Poland -, Malchow – a concentration camp in Germany- and lastly in Auschwitz-Birkenau – a death camp in Poland.

The grade 11 History learners had the privilege of sitting down with Ms Lichterman. During this sit down session we were granted the opportunity of hearing her exceptionally moving story. We all soon realised that Ms Miriam Lichterman is more than just a holocaust survivor, she embodies what it means to be faithful in spite of difficulty, the ability to forgive, and the intrinsic necessity of living with hope.”

This tribute aimed at acknowledging Ms Lichterman’s role in raising awareness about the need to fight against injustice. Although it was painful for her, she re-told her experiences of persecution, concentration and extermination during the Holocaust to inspire the youth to resist all forms of injustice today.

Ms Miriam Lichterman needed to hear the poems /songs and see the art that her testimony had inspired. She needed to hear it from the lips of the poets, lyricists and artists.

The programme was as follows:

A selection of Poetry inspired by Ms Lichterman’s testimony:

If not me – Bianca Cilliers

For you – Alice Bonnes

The Lost, the Found and the Future – Bronwyn Kruger

Words of Thanks: Ashleigh Madell

Its our time- dedicated to Miriam Lichterman