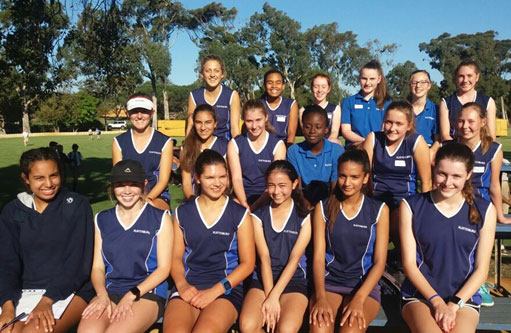 RGHS runners ready for their first league race of the season

How exciting are the following team results: A school needs 3 runners per age group to be placed as a team. RGHS won the U14 and U15 age-groups and placed 3rd in the U16 and U19 age groups. We were unplaced in the U17 age category as we only had two runners. Let’s hope we can fill this age group in the future.

Results from matches played on 5 and 6 May:

Player of the match: Rebecca Hill

The 1st team started the season with a well-earned 1-0 win against DF Malan. We were better in all aspects of play and held possession for long periods of time. The score does not reflect Rustenburg’s dominance. They had very few if any shots at goal and we spent most of the game in their half of the field. Rebecca Hill had a great game and was on the receiving end of a superb target ball, hit into the circle by Ashleigh Noyce, to deflect into the goal. The team is starting to settle into a constructive pattern of play and the speed of Francesca Palmieri up front helped put pressure on their defenders, giving them very little time to make good decisions on the ball. This resulted in RGHS winning ball high up in the field. A good start to the season – Coach Andi Bernstein

Player of the match: Emily Malherbe

The second team opened the season with a comprehensive victory against DF Malan.

The team defended well as a unit and controlled the game from the first whistle. More work can be done on taking our chances in the attacking circle. I’m really proud of the team’s first match performance – Coach Brad Fickling

On Friday 5 May our A team beat Rondebosch Boys 11 – 5 and our B team lost to Springfield A 6 – 11. This was a great result as three of our B Team players were playing their first squash match ever.

Laser-Run combines Running and Shooting in fast-paced and dynamic races including four rounds of laser pistol shooting from 10 meters distance and four times 800 meters run. Athletes have to hit a target 5 times before they can run. The total number of hits is 20 and total running distance is 2 miles (3,200 meters).

Hannah Elvidge (Gr 9) came 5th in the SA Laser Run Championships this past weekend. Hannah has been selected for the SA Invitational Team. She will be competing in the World Championship to be held from 5 to 7 October in Cape town.

Morgan Prins (Gr 10) rows for PGRC (Peninsula Girls’ Rowing Club). She and her team mates participated at the SA National Club Championships on the Buffalo River in East London on 29 and 30 April 2017. They raced over a distance of 2000m.

On Saturday, Morgan and her partner won a silver medal in doubles.