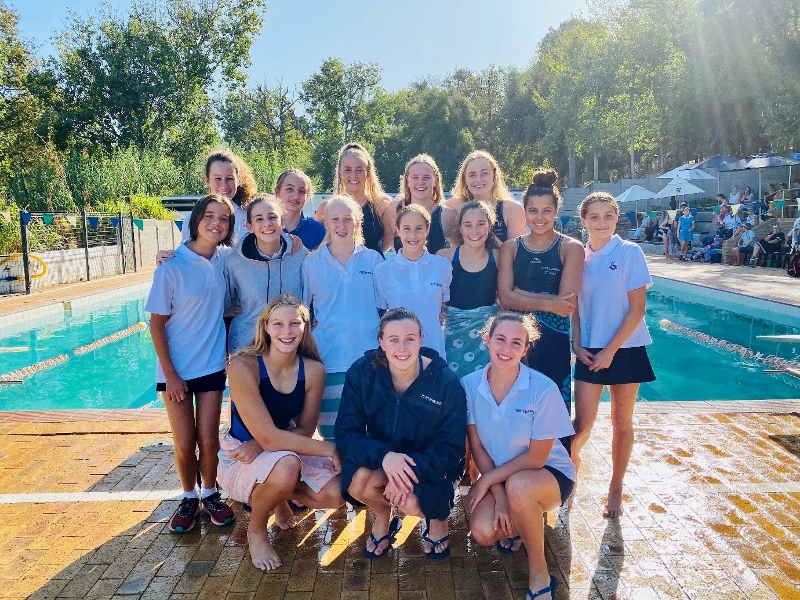 Results of matches played on Wednesday 26 February and Tuesday 3 March:

Rustenburg participated in a gala at Wynberg Boys’ High School on Thursday 27 February. We placed second behind Herschel, out of 7 schools. Congratulations to our swimmers.

We also participated in the PGSGU Gala hosted by Springfield on Tuesday 3 March. We placed third behind Herschel and Springfield.

At the A-league gala held at Rondebosch Boys’ High School on Wednesday 4 March, our swimming team did us proud. We placed second behind Herschel, with St Cyprians coming third. The swimmers were so appreciative of the 150 RGHS supporters who came to cheer them on.

Morgan Russell (Grade 8) participated in the Jack Currie gala this past weekend. Even though she wasn’t feeling particularly well she still swam 3 shiny new PBs and won a bronze medal for 100 Freestyle. Congratulations, Morgan.

Welcome back to our 1st Water Polo team who attended and participated in the Old Petrian’s Tournament, Johannesburg. The team was accompanied by Coach Devon Card and Ms Goble.

‘The First Girls’ Water Polo Team set off before dawn to Johannesburg for the Old Petrian’s Water Polo Tournament which draws 28 teams from all around Southern Africa. Despite their exhaustion, they had their first game against Crawford which was a very tough start to the weekend.

We had the welcome dinner where the girls learnt to street dance and had a huge amount of fun and delicious food at the food stalls.

Unfortunately for the team, our goalie woke up on Friday morning feeling very unwell, but she pushed through for the first game of the day against Roedean. She was unable to play the rest of the games of the tournament but cheered on from the side lines.

The team was not discouraged by this setback and instead used it to motivate themselves to play some of the best water polo that they have played. Despite this, we let in too many goals and therefore struggled to win our pool matches.

Between the lightning delays and the losses, the team remained upbeat and had many laughs playing Mafia with their coaches on the side of the pool, in restaurants and in the hotel conference room. The highlights of the tour included our incredibly tight pool games against DSG (lost 6-5) and Collegiate (lost 8-5) where the team showed resilience and spirit throughout. Not even the 4-hour return flight delay would put a dampener on what was one of the most memorable and fun polo tours.”

Trinity Simmons (Grade 8) placed 1st in dressage and 2nd overall in a jumping and dressage level 2 show this past weekend. Congratulations, Trinity.

Jodie Williams (Grade 11) and Waterford Grandslam competed for RGHS at SanesaQ2 Prelim Dressage and Prix Caprilli, on Sunday, achieving three first places and a fourth place (the competition was very stiff, with 31 entrants in total).

Jodie will go on to do Q3 and Q4 and hopefully be able to continue to regionals and nationals. Wishing you the best of luck with your season and congratulations on your excellent results!

Alice Wannell, Danielle Henry, Amy Basson, Rachel Behne, Kirsten McArthur, Hannah Murphy, Robin Day, Eryn Jacobs leave early on Thursday morning and will be rowing for their club (PGRC) in the club competition, and RGHS in the schools competition. They are competing in the National Championships at Roodeplaat dam in Pretoria from the 6-8 March 2020. We wish them the very best of luck.