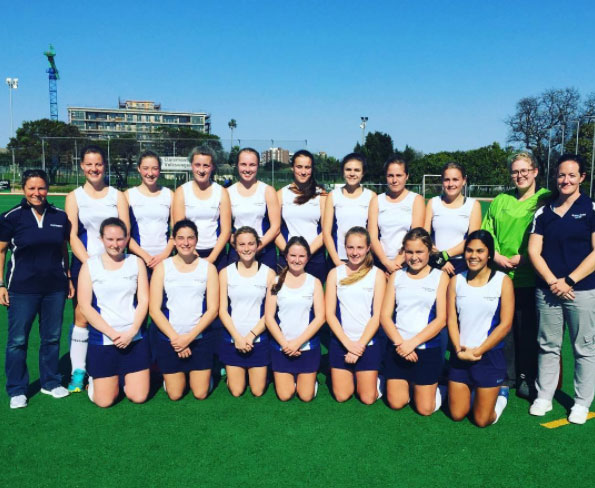 Good luck to our First Hockey Team who will be participating in the Finals of the SPAR Hockey Tournament on Sunday 6 August in Hermanus. Safe travels and good luck.

Rustenburg is doing fantastic things on the Cross Country course. We are leading the Team Results in the U14; U15 and U19 categories.

Results from matches played against Herschel:

Results from matches played against Wynberg:

RGHS 1st Hockey team participated in the Cape Town International Hockey Festival held at various venues over 5 days last week. The girls played 8 matches over 4 days as Saturday was a rest day. This is a lot of hockey and the girls did really well in coping with the tiredness of playing and attending classes throughout the first three days

A great start to the tournament where RGHS played a passing game and were always able to hold the ball for long periods of time, resulting in many circle entries and goals.

RGHS dominated play and earned 7 penalty corners without conceding any in return. We still need to work on converting our goal scoring opportunities but were technically better than the opposition and thus were able to score goals.

An early start, this was always going to be a tight match as they have a couple of national junior players in their team. It was a great match played a lot in the midfield where neither team dominated. RGHS managed to score first by a great deflection goal from Rebecca Hill in the second half, but we were unable to keep them out and they equalised within 5 minutes, resulting in a draw.

Another game where we attacked with strength and scored early. This ensured that DF Malan was always on the defensive and we picked up our game going forward and winning the 50/50 ball, thus resulting in 3 field goals and a converted penalty corner.

A game in which we were very slow and sluggish to start. Settlers were quick to the ball and played like they had nothing to lose, resulting in them scoring an early break-away goal. RGHS dominated in all aspects of the game as shown by the 8 to 0 penalty corner count but we struggled to score, and only managed to tie the game just before half time. The second half was a lot better as Settlers got tired and we scored 3 goals without reply resulting in a 4-1 scoreline.

We were outplayed by a side that was quicker, fitter and better disciplined than us. We were caught out by them taking their free hits quickly and their ability to move the ball and transfer across the channels with speed, resulting in creating extra space through which they could attack and score a goal in each half of the game.

Another tight encounter in which RGHS scored first, only to have Paarl Gym reply just before half time. This resulted in having to take showdowns where Caroline Schreiber in goal was outstanding!! We were tied 3-3 after the first round and then lost by one goal on the sudden death showdowns.

A match in which we were always looking like the stronger side and the score does not reflect how much possession we had! Under very hot conditions, the girls did very well to keep up the tempo and ensure that we passed the ball a lot and didn’t run with it too much. The goal was scored from a well worked penalty corner from Brittany Gouws resulting in RGHS finishing 7th (the TOP Cape Town school at the tournament!)

Congratulations on a very busy week of hockey.

On Thursday 27 July RGHS played against Reddam Constantia at Rustenburg. The results were as follows:

Jordyn Campbell (Gr 10) has been seeded 9 in South Africa U16 this year – It is a double age category and Jordyn is the highest seeded 15 year old. A very fine achievement.

On Friday 28 July both RGHS A and B teams played league matches.

Congratulations to Hannah Elvidge (Gr 9) who participated in the Western Cape Short Course Championships from 21 – 23 July.

Hannah Elvidge (Gr 9) participated in the SA Biathle (continuous run-swim-run) Championships on 1 July and placed 4th in her age-group.

Hannah also competed in the SA Triathle (continuous shoot-swim-run) Championships on 2 July and placed 6th in her age-group. Hannah is such a versatile athlete and we congratulate her on these wonderful achievements.

Congratulations to Tyla Humby (Grade 11) who was selected to play as a member of the Western Province Junior Golf team in a tournament in Orkney, NW Province during the July holidays. We are very proud of this fine achievement.

Pictured right is Tyla playing on the course in Orkney.

Congratulations to Megan Phillipson (Gr 9) on winning the Pinelands 5km road race held on Sunday 30 August in a time of 22m10s. That really is a fabulous achievement.