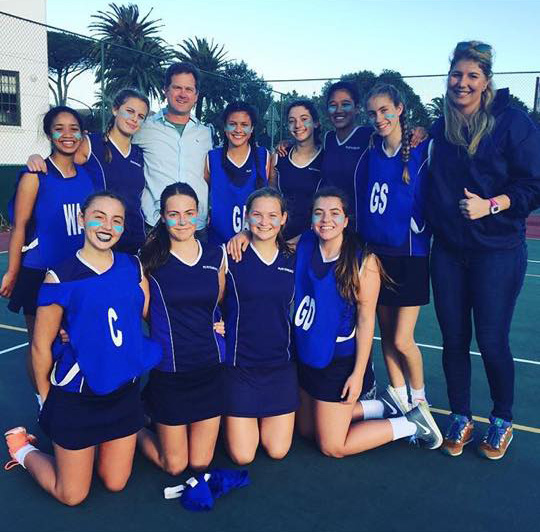 Wishing all the Rustenburg Girls the best of luck as they represent RGHS at the various PGSGU tournaments over the next 2 weekends:

Water Polo – the season opener TREADATHON will take place this weekend starting at 4pm on Saturday 2 September and ending at 4pm on Sunday 3 September. Come down and support Nicola Barrett (current SA Ladies player) in her effort to tread water for 24 hours. More details at https://www.facebook.com/events/874201532733308/ or contact the Sports Office via email for more details.

Netball touring team trials will take place on Thursday 7 September from 15h30 until 17h00. The 1st Netball Team will be travelling to East London from 27-30 April in 2018 to participate in the National Girls’ Schools Festival).

Water Polo trials will be taking place in the first week of September.

(Girls will need to sign up on the Sports notice board outside the Staffroom by Friday 1 September).

Past Pupil Netball and Hockey matches: These will be taking place on Wednesday 6 September. Please note the Hockey programme times below have changed. Netball times stay the same. We still need parents to volunteer to play for our Parents Teams. Please contact the Sports Office asap.

“Rustenburg’s U16 team took part in the Bloemhof Investec U16 All-Stars Tournament. For this tournament you select a team with your best U16 players so we had the privilege of three 1st Team players being part of our team. We started off slowly and it took some time to get used to everyone which cost us a 0-2 loss against Bloemhof. With only a twenty minute break before our next game we quickly identified areas we could improve on and drew 0-0 to Rhenish. We moved on to play against Somerset College straight after Rhenish and we carried our momentum and worked beautifully together as a team, resulting in a 3-0 win (goals scored by Ashleigh Noyce and Rebecca Bysshe). Our last pool game was against Stellenberg. Georgia Hill (Captain) put us on the score board but Stellenberg managed to sneak in a goal right at the end, resulting in a 1-1 draw. We placed third in our pool and played against Fairmont for 5th/6th place. It was a very tight game and both teams defended really well. We drew 0-0 and ended in a shared 5th place. Thank you to all the parents for getting us there and for supporting us in the icy and rainy weather” – Coach Ms Viljoen

Results of Matches against Springfield are as follows:

Rustenburg hosted the U19 and U16 PGSGU Tournament on Friday 25 August and the U14 and U15 event on Saturday 26 August.

The events ran extremely smoothly and all the visiting schools have been very complimentary of the new format that was used. Mr Gates was present at the two prize-givings that were held at the end of the tournaments. It was a great pleasure that one of the winning teams was our own Rustenburg girls. The U16 Team really did us proud – they won the Interschool trophy and must be congratulated on this fine achievement.

A special thank you to all the coaches for their dedication and commitment throughout the season. Congratulations to all our players and captains who held their teams together.

The full results are as follows:

Our Junior Soccer Team played their first match of the season on Saturday 26 August. We played against a more experienced side from Rhenish Girls’ High.

There was a great atmosphere and our Junior Team really held their own in the first half. The final score, however, was 0-7.

We were able to use the Rygersdal field for the match. Rygersdal Coach James has been pleased with the progress made and will be reporting back individually to the girls. RGHS is proud to be able to offer Soccer as a sport to our pupils. We wish to grow the interest and will continue to employ Rygersdal Football Club coaches in the future.

Congratulations to all our Soccer players.

Congratulations to Jade Lawson (Gr 10) who has also been selected to represent the Western Province Touch Rugby Team at the Interprovincial tournament to be held in Durban later this year.

Congratulations to Hannah Elvidge (Gr 9) who placed 1st in the U17 age group at the Western Province Winter Biathlon Championships. She scored 2248 points for her swim and run.

After the completion of three trials where the top two counted for team selection, Natasha van Greunen U18 (Gr 12) and Juliet Fiet U16 (Gr 9) have been selected to represent CWSA  in the 2017 Billabong SA Junior Championships which will take place from 4 to 8 October 2017. We wish them all the best in this event, let’s hope the right waves come your way.