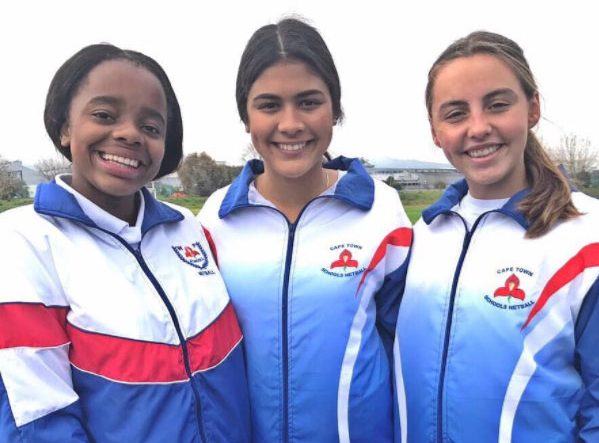 Welcome back to a very busy term with regards to sport. During the holidays we posted sports news as and when it happened. Thank you to the girls and parents who kept me updated so that we could keep the @rghssport Instagram account updated.

If you don’t already follow us then please start following the Sports Department on Instagram and Twitter for all up-to-date results and happenings. Our handle is @rghssport.

Western Province A won the silver medal at the SA U18 National Tournament, an excellent result, losing only the one match in the final.

Congratulations to Casey Wheeler, (our Hockey Captain) who was selected for the SA U18B team. An extremely impressive feat.

The U18 Zonal South Team played their tournament in Bloemfontein. Georgia Dugmore; Sarah Firth; Sharna Naidoo (Gr 11s) and Kelly van Vlaanderen (Gr 12) did duty for this team. They had a very successful tournament and placed second overall.

The Zonal Team coached by Ms Viljoen placed 4th at the National Tournament held in Bloemfontein during the first week of the holidays. Georgia Hill (Gr 10) captained the team with Nika Hofmeyr (Gr 9) acting as the vice-captain.

The Zonal Team coached by Waleed Jabaar, current RGHS U14A coach, and ably assisted by Ms Thompson, also placed 4th at the National Tournament held in Bloemfontein during the first week of the holidays. Holly van Hoogstraten (Gr 8) captained the team and Josie Malherbe (Gr 8) was also a member of this team.

Three of our girls represented Western Province at the Western Cape Schools Inter-District Tournament held in Wellington from 21 to 22 July.

Isabella Little was a member of the Cape Town Dolphins Team and they placed 3rd overall.

Danielle van Breda was a member of the Cape Town Disas Team and although their team didn’t place particularly well, Danielle said they learnt a great deal, made many new friends and had heaps of fun.

Jordyn Campbell (Gr 10) represented the U16 Western Province Team at the Inter-Provincial tournament held in Bloemfontein from 30 June to 5 July. The WP team placed 6th. Congratulations on this result.

Congratulations to Daniella Solkow (Gr 10) who represented South Africa at the Maccabi Games in Israel during the holidays. Daniella swam Personal Best times in all her races. She made the finals for all her races and walked away with the only medal of the swim team – a Silver medal in the 50m Freestyle.

RGHS is extremely proud of our medalist!

Zoë Naude, Amber Jossie and Britney Price (Gr 11) are congratulated on their selection as members of the Touch Rugby training squad to play at the 2018 World Cup Tournament in Malaysia. Rustenburg is immensely proud of this achievement. Read more about Zoë in the section on RUGBY elsewhere in this newsletter.

Cameron Alexander (Gr 10) represented the U19 Namibian Team at the South African U19 Inter-Provincial Championships held in Cape Town from 15-22 July. Namibia played in the A section and placed 4th. Cameron was ranked twelfth in the A section. Congratulations on this fabulous achievement.

Congratulations to both Kayleigh Beattie and Bridgette Bauer (Gr 11s), who have successfully qualified for the SANESA Cape Metro/West Coast Team of 2017. They will be competing at the Regional Finals that are being held from 10 to 12 August 2017. This competition is between the Western Cape regions of Cape Winelands, Overberg, Cape Metro/West Coast and Eden. At these Championships a SANESA Western Cape Provincial Team will be selected to compete at the SANESA National Championships held annually in Gauteng. Both Kayleigh and Bridgette have been selected to represent the A team in all disciplines, namely Performance Riding, Show jumping, Equitation, Dressage and Prix Caprilli A and B.

We wish the girls all the very best of luck.

Zoë Naude (Gr 11) represented the Western Province U18 Girls’ Rugby Team at the Craven Week tournament in Welkom. WP played in the final against Border and won the tournament. Congratulations to Zoë on the role she played in this success.

Jade Lawson (Gr 10) is making Rustenburg very proud in a different sphere. Jade was one of the AR’s (Assistant Referee) for the curtain raiser between WP U13 Craven Week vs WP U13 Academy before the Super Rugby Quarter Final: Stormers vs Chiefs. Jade is busy most weekends with her rugby refereeing at tournaments organized through the WP Rugby Referees Society.  She has also connected with the respective Rondebosch Boys’ Schools and is a Referee for the U9 games at Rondebosch Boys’ Prep School and does AR (Assistant Referee) duty for Rondebosch Boys’ High School. Look out for Jade doing duty at any rugby match in the future.