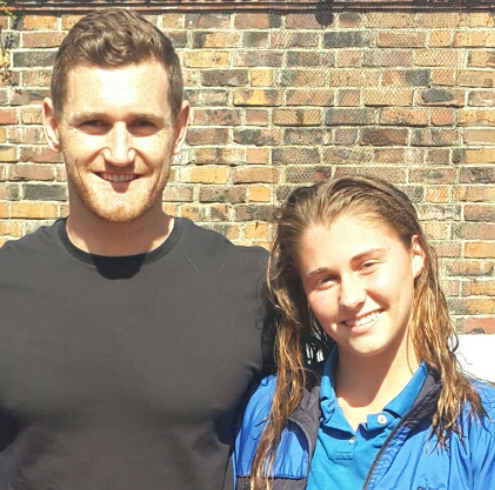 Hannah Grace Elvidge (Gr 9) entered a competition run by Investec and had to submit a 300 word motivation to both Investec and Cameron, explaining why RGHS should be the chosen school to host a clinic with Cameron. Hannah was super excited to meet Cameron in person and as a swimmer herself, she was not going to let this one-in-a-million opportunity go by and won this prize for the school.

On the day of the clinic, upon his arrival at RGHS, Hannah was privileged to accompany Cameron from his car to the pool deck and introduce him to her swim team. It was awesome to listen to Cameron’s humble beginnings, from being a premature baby, to not speaking yet at 3 years of age and later being diagnosed with ADHD. As a result, he was put onto medication, which did not agree with him, and so he swopped them for sport and swimming, which is where it all began.

Cameron mentioned that his biggest support throughout the years has always been his mother. He was honest and shared that his journey as a competitive swimmer has not always been easy. The commitment to training and working hard never eases and there is no quick recipe for success. Consistent dedication is what will get you there. He also shared that he was getting married next year in Greece.

Cameron did some dry-land drills as well as a breaststroke session with the girls, which the swimmers all thoroughly enjoyed, after which there was a photo and autograph session for everyone.

We are extremely proud of Hannah Schaefer (Gr 10) who has been selected to attend the Water Polo Training Camp that is by Player Invitation only. At the conclusion of the Schools’ Water Polo South Africa (“SWPSA”) Inter Provincial Tournament in December, Hannah will be attending the Under 16 (Born 2001) Boys and Girls National Training Camp in Port Elizabeth. At this training camp, a team will be selected to represent South Africa at various tournaments in 2018. We wish Hannah all the best at this camp.
RGHS also wishes all the Rustenburg girls who will be representing Western Province at the National tournament in December, all the best. These girls are Hannah Hillman; Mia Lazarus; Kayla Henry; Alexa Edwards; Georgia Hill; Ruby Wares; Rebecca McConnell; Hannah Schaefer; Jamie van Schoor; Jessica Knapp.