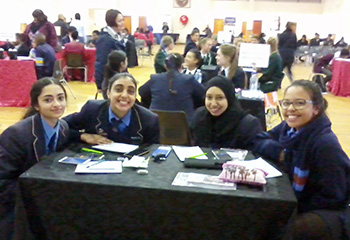 Four Grade 12 Rustenburg girls took part in the Spine Road Accounting Olympiad held at Spine Road High School in Mitchell’s Plain, on Saturday 12 August 2017.  This was the fourth year that the competition was held; the organisers aim to inspire learners to choose a career in the exciting field of commerce once they matriculate.  The learners representing RGHS were Rafiqua Anwar, Taskeen Parker, Kauthar Parker and Nuhaa Francis.  They enjoyed meeting and competing against learners from many other schools from around the Cape Peninsula and Boland regions.  There were 26 schools altogether that took part in the competition.

The competition took the form of a quiz which was adjudicated by KPMG.  There were originally meant to be 20 questions in 20 rounds.  There was also a time limit set for each question, after which a runner came to fetch the answer sheet and take it to the adjudicators to mark.  Due to an unfortunate misprint with a 15 minute question, round 6 had to be redone in order to ensure fairness.  This meant that the competition was running behind time, so KPMG eventually made an announcement that they would cut three questions towards the end of the quiz.  The questions really challenged the learners to think, reason and critically analyse; and of course there were lots of calculations to be done!  It also served as good revision for the upcoming prelim examinations.

There was a refreshment break half-way through the proceedings, when delicious finger food was served, and the learners had time to talk to participants from other schools.

The Accounting teachers (who acted as their team’s coach) sat in the audience and could see the questions, which were also projected onto a screen at the front of the big multi-purpose hall.  Western Cape Education Department official and Accounting Subject Advisor, Mr Terence O’Connor was also in attendance.

At the end of the morning, Westerford High School, the reigning champions, managed to keep their title.  All the participants at the competition received certificates of participation.  A big thank you to the organisers for a well-run event.  There were spot prizes awarded throughout the morning, thanks to the generous sponsors.

There was also an inspiring address by a young business women (34) who currently owns and runs two businesses.  One of the members of the team from KPMG was Rustenburg Old Girl, Toinette Tobias (E2011).  It was inspiring for our learners to see a former Rustybug making us proud.