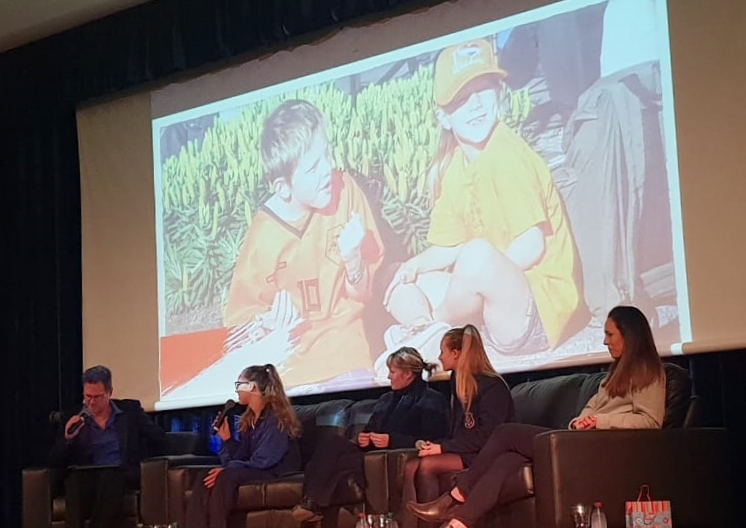 On the 20th of August 2018, Mr Gates hosted the last “Live at Rustenburg” for the year. He interviewed Lara Rule (Grade 9), Cassandra Scheepers (Grade 11), Jenna Martin (Grade 9) and Mrs Barrett-Theron.

Lara Rule has been attending Dutch school since she was 4 years old and is now fluent in the language. She has been in many competitions and has won 35 medals.

Cassandra Scheepers gave the school a bit more insight as to what the Pride Campaign is all about. Pride is a space where everyone can feel welcomed and accepted. She talked about the annual Pride March that happens in Sea Point and cleared up some stereotypes. She gave some helpful tips for anyone who is struggling with any personal issues they might be facing.

Jenna Martin is a gymnast. She has been doing gymnastics for a very long time and said that she followed in her sister’s footsteps by joining gymnastics when she was younger. She has taken part in many competitions over the years and we are very fortunate to have such a  budding athlete in our midst.

Mrs Barrett-Theron, who we all know as one of our amazing teachers, is also part of the women’s SA 7s Rugby Team. She told the school about how she was able to play overseas and what it’s like to be a woman playing rugby, which isn’t recognised at the same level as men’s rugby.

Thanks to Savannah Althoff-Thomson (Grade 12) for all the research work she has done for Rustenburg Live this year.

Article by Roxanne Comyn, B5