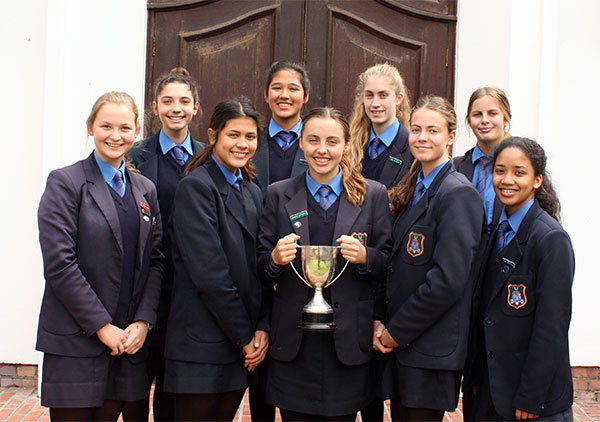 Rustenburg Girls’ High Schools u16A team won the PGSGU Netball Interschool’s Tournament hosted at the school on Friday 25 and Saturday 26 August. Rustenburg last won the trophy 13 years ago in 2004 and we are elated with the result!

PGSGU (Peninsula Girls’ Schools Games Union) consists of six Girls’ schools – Herschel, Rustenburg, Sans Souci, Springfield, St Cyprians and Wynberg Girls. The tournament started on Friday with the U19A and U16A age groups. The U16A team won 5 of their 6 matches; losing their final match of the afternoon to Herschel in a tightly contested match 6-7. So closely contested was the tournament, that Rustenburg and Springfield had the same number of points and goal difference.  RGHS’s win was decided on a previous pool match with Springfield.

The U19 age group was won by St Cyprians who had not won the trophy since 2005. On Saturday the U15A and U14A teams played, Wynberg Girls’ won both age groups.

Coach Ms Nanette Olivier commented: “This has been a tough season and the girls pulled out all the stops, with a strong show of character and incredible teamwork to win this tournament. We are very proud of their achievements.”