Another enjoyable and successful National All Girls’ Festival took place this past long weekend (27-30 April) in East London at Clarendon Girls’ High School where Rustenburg competed and collaborated with other girls schools from across South Africa.
Results and feedback from our teams are below:

The RGHS 1st Hockey Team had a very successful tour to East London. They placed 5th overall out of 18 teams. The highlight of the tournament was the match against Meisieskool Oranje, who are ranked first in the country. Rustenburg lost the match 0-1 with Oranje managing to score in the last 5 minutes of the game. Rustenburg won their final match on show downs with goalie Caroline Schreiber saving all of them. Courtney Wheeler and Caroline Schreiber were both selected into the tournament team, a 32 man squad will tour the Netherlands at the end of the year.

The NAGF Netball tour is always a competitive and tough tournament. The team played 9 matches over the 3 days. The tournament gives the players an opportunity to play the top netball schools in the country. This year the Netball Team was placed in a very competitive pool. The team ended 6th in pool A and finished 12th overall. They played some tightly contested matches and suffered several injuries, ending day two with no substitutes.
The Team was lucky to have four experienced matrics present, who set an example under the leadership of Amber Jossie and Ayla Figueira.

The Tennis Team was placed in pool B against Rhenish, La Rochelle and Eunice. Megan Davidson won her singles match vs Rhenish. Megan and Juliana Barrish won their doubles matches against Eunice and the team beat La Rochelle 5-3. They played a cross-pool match against Queenstown, winning 6-0. The team placed 11th overall, winning their final match against Pretoria Girls’ High School.

The Vocal Ensemble participated in the All Girls’ Schools Festival in East London over the long weekend. The group had to prepare two songs that were performed at the Concert on Saturday evening but was also involved in three massed items performed by all the participating schools. The programme also included masterclasses, drumming and yoga sessions, as well putting together a mash-up of two nursery rhymes.

Although the debating team only won one of their five debates, the members (Mikayla Shaw , Katia da Silva Valente, Aviela-Loren Abrahams, Kristina Semmelink and Shelby van der Watt) gave a very good account of themselves against some strong opposition. Valuable debating lessons were learnt, which will assist the team for the final round of the Rotary competition against Reddam on Monday 14th May. 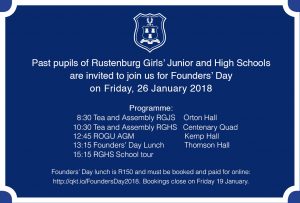