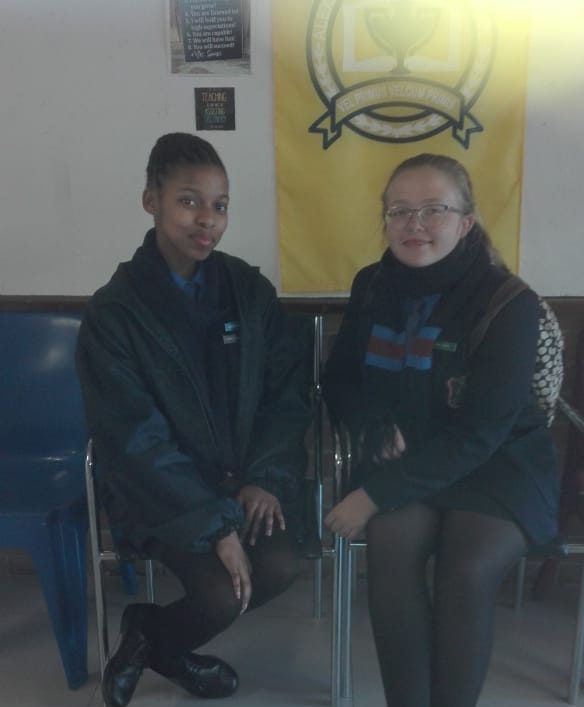 On Thursday 11th and Friday 12th October two Rustenburg learners had the opportunity to spend a day at Alexander Sinton High School in Athlone, and to subsequently host three Alexander Sinton students at Rustenburg. The purpose of the exchange, organised by Mr Van Dyk and Mrs Robinson, was to reinforce our learners’ understanding of the educational legacy of apartheid which they have been studying in Grade 9 history. It also served to expose learners to a broader range of cultures and communities within their own city; an important experience for a school engaged in the work of transformation and dialogue.

As much as possible the Rustenburg learners, Kumi Scott and Mori Somo, were encouraged to participate in their exchange school as they would at their own. On Thursday morning, three Alexander Sinton learners were waiting at the reception area along with their history teacher Mr. Lbethe, to welcome Kumi and Mori. After a short tour of the school they followed their hosts to all their classes, which included Geography, History, English, Art, and Drama. Throughout the day they were welcomed warmly by teachers and learners alike, who were curious to hear their impressions of Alexander Sinton, and to discuss its differences with Rustenburg.

The reflections of the learners following the exchange were insightful and profound. The difference that most struck Mori was the atmosphere of the schools. Alexander Sinton she described as vibrant, with students having very close relationships with their teachers, and creativity being highly prized. In contrast, it was evident to her that Rustenburg placed a higher priority on academic achievement, with the school environment being very quiet and disciplined. Kumi reflected on the exchange as being the first time she had the experience of being a racial minority, and discussed the vulnerability of standing out among crowds of students. Both of them were struck by the levels of learner poverty that the Alexander Sinton teachers described. The poverty was particularly striking given how knowledgeable and articulate many Alexander Sinton learners were. Both Kumi and Mori reflected that this seeming juxtaposition challenged their previous assumptions of the kinds of learners who attended less advantaged schools.

It is the hope of both schools that the friendships that were developed over the course of this exchange will continue, and that other Rustenburg learners may soon also have the opportunity to spend a day at Alexander Sinton.