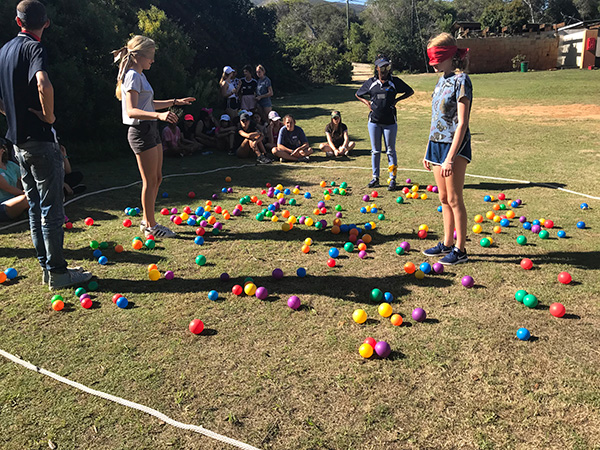 At the end of the first term, the Grade Nines went on the much anticipated overnight camp at Onrus.  While many were excited for the actual camp, the early departure received less enthusiasm; however, among friends everybody warmed up and it became a typical bus ride: that is to say loud (and terrible) singing and a lot of chatter.

Upon our arrival at the camp, we all embarked on a long trek to the dorms, doubly tricky for those with suitcases. We settled into dorms and met the Lead-4-Life team. These enthusiastic leaders started by putting us into groups and having us celebrate the linguistic diversity of South Africa. We had to come up with a “tribe name” which included three of South Africa’s official languages.

Four smaller tribes were combined to create four larger groups that participated in a programme of rotational activities which included an obstacle course, a treasure hunt and charades, a blindfolded communication game and a series of logical and physical activities. After two of these rotational activities we all gathered together to head to the beach to swim in the… lagoon. Despite facing the disappointment of not being allowed in the ocean, we all just enjoyed the warmer lagoon and sand and sun.

What followed was a fun-filled evening of inspiration occupied with stories, dancing, music and hot chocolate (after which everybody “settled down” to “sleep”).

The morning brought all the sleepy-eyed girls outside for their last rotational activity and thereafter  a last swim in the lagoon for an exciting water-filled competition that included a lot of screaming and splashing.

Those last activities concluded our fun camp. We headed home in a considerably more subdued bus to find our parents waiting to greet us and take us home to the comfort of our own beds.

We would like to thank everyone involved (especially the Lead-4-Life team) for a wonderful experience and many memories that I know we will all look back on dearly.