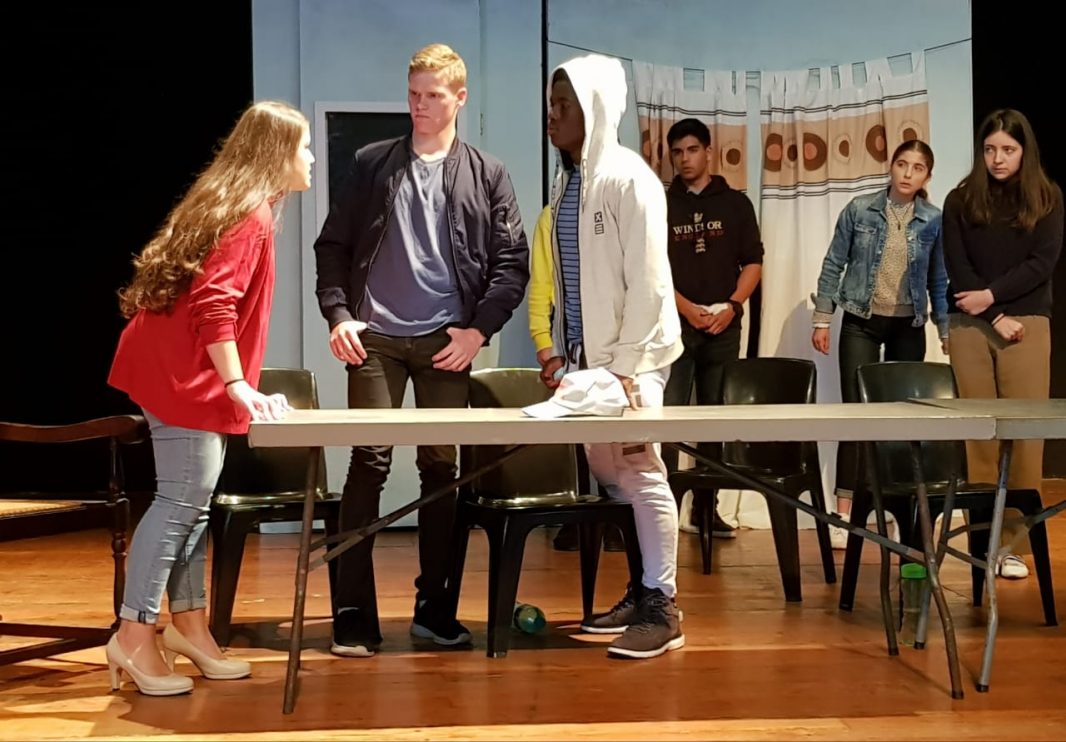 This description applies to 12 Angry Jurors in many ways. Not only is the death penalty a controversial hot topic that elicits a range of emotive opinions, but the events of the plot unfurl on what is one of the hottest days of the year. On stage, a number of the characters are hot-headed and unable to control their flaring tempers as tension in the confined space simmers and sizzles. Scathing words spurn and burn those who disagree. Juror 8 (Nicole Smith) puts herself in the firing line when she courageously stands against the majority, particularly Juror 3 (Robert Walker) who has reasons for being so hot under the collar. Of course, ongoing media coverage means that the United States of America is hot news worldwide.

Then there is the hot talent of the cast.

Please remember that the actors are all teenage high school pupils, some of whom have never been on a theatre stage before. This is easy to forget given their strong stage presence, sterling ensemble interactions, nuanced portrayals and powerful characterisation. Adopting a particular US dialect and sustaining this throughout a 2-hour production, never leaving the stage, is no mean feat. Even more commendable is the tremendous psychological depth. The actors have studied Freudian instincts so each have applied emotional layers, ranging from the self-control of supergo to the unabashed and unrestrained ID. Don’t underestimate the enormous skill and commitment it takes to ‘be’ a character, not pretend.

Selecting a follow-up script for A Midsummer Night’s Dream (2018) was a challenge, however our goal has always been to tackle work in contrast to what has been seen before. This, we believe, is how creativity grows; through change and difference, exploration and experimentation. Theatre audiences need to be kept on their toes. Theatre directors cannot become complacent. Schools need to move forward.

12 Angry Jurors might not have the whimsy of its predecessor, but it speaks to its time by encouraging introspection and subsequent moral debate.

One of the hallmarks of the Theatre Realism movement was abandoning the notion that characters are either ‘goodies’ or ‘baddies’. This easy categorisation was replaced with the antihero. Antiheroes are struggling, imperfect protagonists, often victims of much greater forces. All of the characters in 12 Angry Jurors are antiheroes, to a greater or lesser degree. Each exhibits shades of both virtue and vice. Quite possibly this is the ultimate message which the playwright hopes to impart: that there are no pure villains, only villainous acts, the worst of which might be ignorance.

When called to weigh in on the value of human life, what could possibly be worse than remaining oblivious to just how precious it is. 12 Angry Jurors serves to prick our consciences.

(Head of the Arts Faculty, Rustenburg)

(Principal of the Cape Academy of Dramatic Arts)