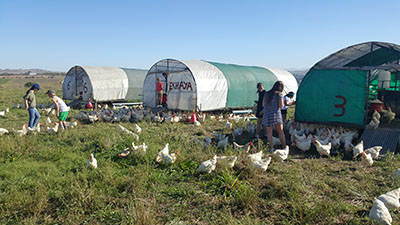 On the 21st of April, members of the Earth Children Society went on an outing to Spier farm in Stellenbosch, where they met an extraordinary organic farmer named Angus McIntosh. After an informative briefing on the destructive, wasteful and cruel methods of commercial farming, we toured the farm and gained a vast amount of knowledge on sustainable and ethical farming.

Our first stop was at the chicken ‘coups’ where we witnessed the free and plentiful lifestyle of these friendly little creatures as well as the clever method for sorting their eggs into size categories. Next we went to the pig sty, where Farmer Angus explained how he rotates the animals to different regions in order to fertilise and maintain the soil. We then visited the cattle and were taught about the clever mineral stall that allows the cattle to restore any minerals that are lacking in their bodies, thus preventing illness and disease. This was accompanied by a plant that cleverly attracts wasps, which naturally kill the insects that are the carrier of a type of cattle disease. We also learned that the animals were transported and slaughtered in a Halaal way, kilometres away from the farm in order to reduce any trauma.

This was an amazingly interactive learning experience for all the girls who participated and we were treated to some yummy organic biltong and eggs to take home. The Earth Children are very grateful to Farmer Angus for his generosity.