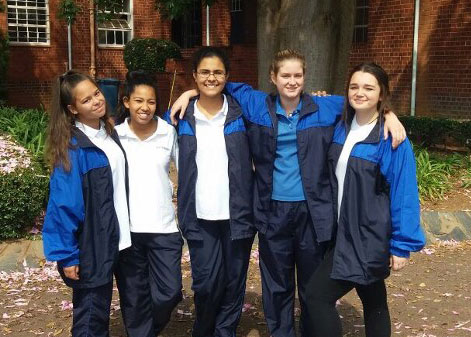 On Tuesday 02 May the RGHS team (Katia da Silva Valente, Kristina Semmelink and Mikayla Shaw) won its First Round debate against Springfield. They provided a strong ECONOMIC argument to oppose the motion that: THIS HOUSE WOULD REMOVE VAT FROM FEMININE HYGIENE ESSENTIALS OF SANITARY TOWELS AND TAMPONS.

The Second Round took place on Thursday 04 May AGAINST Sans Souci and RGHS proposed the motion that:   THIS HOUSE WOULD MAKE IT COMPULSORY FOR ALL NEW HOUSES BUILT TO HAVE BOTH ALTERNATE ENERGY AND GREY WATER/ WATER HARVESTING SYSTEMS. Rustenburg won this debate and Mikayla Shaw was, once again, judged the best speaker.

The Third Round will take place on Tuesday 09 May AGAINST Claremont and RGHS will be proposing the motion that: THIS HOUSE WOULD MAKE THE VOTING AGE 16.

If the team makes it to the finals on Thursday 11 May, the motion will be:  THIS HOUSE WOULD MAKE IT COMPULSORY FOR ALL PRIMARY SCHOOL LEARNERS TO LEARN A LOCAL INDIGENOUS LANGUAGE.