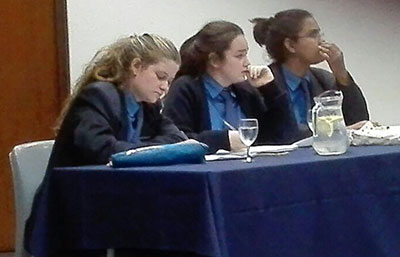 Saturday 20 May:  Debating tournament at Springfield

A number of our juniors took the opportunity of developing their debating skills by attending the tournament organised by Springfield. Our girls were put into mixed teams and had an enjoyable day sharing their skills and ideas with other debaters.

Monday 22 May: RGHS vs Cannon’s Creek

Our coaches, Tamsin Metelerkamp (Juniors) and Jordan Pfotenhauer (Seniors), have worked hard at developing both teams and reaped their rewards in the last three debates of the season. Both teams finished with 3 wins out of 5 debates.