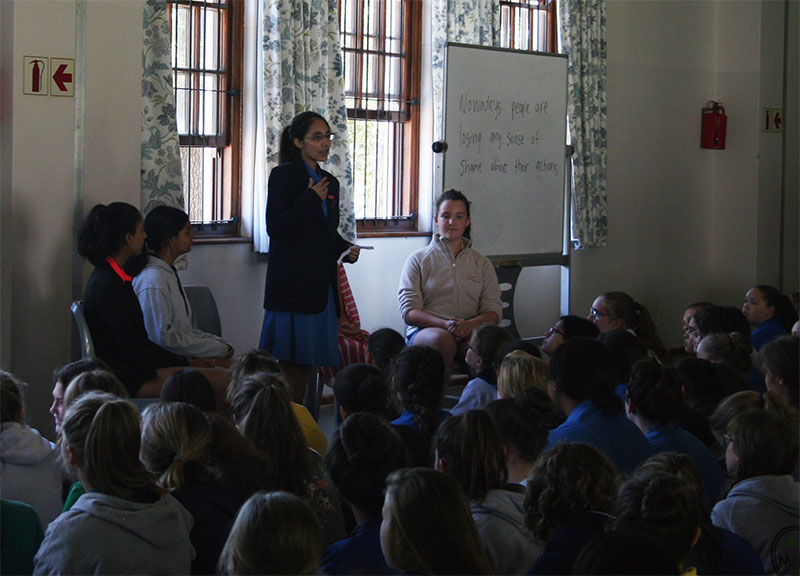 All the adjudicators agreed that the audiences were the most appreciative and involved we have had in years. In addition, there was a definite improvement in the overall quality and content of the discussions held at this year’s competition, especially by the top two Senior teams.

Cambridge’s Junior Team (Talitha Kumi Scott; Clea De Klerk; Katherine Hendricks; Emma Irwin and Sarah Irwin) ensured that the topic: LIKE IT OR NOT, WINNING IS EVERYTHING, was discussed from a wide range of angles. The adjudicators were unanimous in their decision.

The Junior results were as follows;

It was so tight at the top in the senior section of the competition with a mere nine points separating first and second place. Innes’ speakers: Elizabeth Stevenson; Aviella Abrahams; Fozia Hendricks; Zahra Mohamed and Alida van der Merwe, were excellent in their delivery on the topic:  HUMAN RIGHTS ARE MORE IMPORTANT THAN ENVIRONMENTAL CONCERNS. However, it was the Michiel Vos team (Darian Cloete; Adwoa Danso; Talitha Wyne and Saige King), excellently chaired by Kristina Semmelink, whose more in-depth and fuller treatment of the topic: IN THESE TIMES MORE HARM IS DONE WITH WORDS THAN WEAPONS, that influenced the adjudicators’ final decision.

The Senior results were as follows: